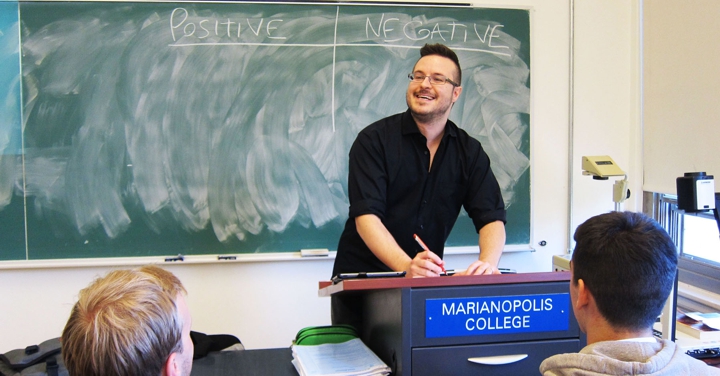 What do we mean when we say that Marianopolis students get to take cool classes by interesting teachers? Well, one example is the Comics as Literature course taught by Nicolas Carrier. The third-generation teacher and his students analyze the visual and textual aspects of comics, graphic novels and other works in this ever-popular genre. Students explore comics as an evolving medium and understand the importance of what is increasingly seen as a significant literary form.

Check out this video for what Professor Carrier has to say about his unique class.

You have been teaching Comics as Literature for eight years. How did that come about?

It was the first class I was hired to teach at the College. I was a bit nervous about mentioning my desire to teach a course on comics in my job interview but I let it slip and it ended up going over extremely well. The Marianopolis English Department is open-minded and cutting-edge. For example, we offer several courses that tackle film and television as literature and I’ve recently started teaching a videogame alongside a couple of novels in my literary themes course. When you add that to all the courses we offer on more conventional literature and the upper-level courses we offer on everything from business writing to creative writing, it makes for a lot of diversity and choice.

What’s the difference between a comic book and a graphic novel?

There isn’t a difference, really. The term “graphic novel” is just a buzzword that people have been using since the 1980s to describe longer comics. Some academics and creators of comics like to use it to identify certain comics as mature and literary, whereas others don’t like the way it implies that “comics” is a dirty word. I’m not fussy either way but I chose to call my course Comics as Literature because it’s a better reflection of what we cover in it: some larger comics that could easily be called “graphic novels,” as well as some shorter comics that are undeniably literary despite their brevity.

Give us a preview of the comics you cover.

The three major comics we cover in the course are three of the most celebrated and respected comics of all times: Maus by Art Spiegelman, Watchmen by Alan Moore and Dave Gibbons and Jimmy Corrigan by Chris Ware. That provides my course with a wide variety of genres, such as autobiographical comics and superhero comics. I also teach a handful of comics in some of my other courses alongside short stories, novels and plays. For example, I’ve taught Alison Bechdel’s Fun Home for a few years now and I’ll be teaching Bryan Lee O’Malley’s brand-new Seconds for the first time this semester.

What if I’ve never read a comic book in my life?

That shouldn’t be a problem.  Most of the students I’ve taught in the context of my comics course started out with little to no prior experience with comics. I always take the time to discuss both the mechanics and the history of comics in depth at the beginning of the course and we start working with shorter comics before we move on to the bigger, more sophisticated material.

What did you study? What do you do outside of class?

I studied English literature at Saint Mary’s University in Halifax and Concordia University here in Montreal. I’ve studied and taught a wide variety of genres of literature from a wide range of historical periods but I tend to drawn primarily to contemporary literature.  I recently finished writing a very large novel that I’d been working on for roughly a decade. Now I’m spending a fair bit of my spare time editing it and figuring out how to get it published.