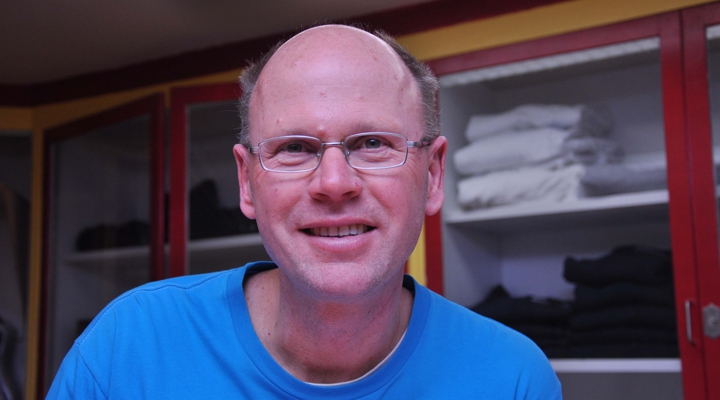 Ask any current or past student who is the best-known person at Marianopolis and they won’t hesitate to name Wayne. That’s Wayne Clasper, who runs the campus store and information centre. For almost a quarter of a century, he has been a friendly resource, as well as the guy who offers great on-campus employment. Learn about the many services he offers and the different types of help you can receive at what is known as Wayne’s World.

What is Wayne’s World?

Why is it called Wayne’s World?

It originates from the 1992 film Wayne’s World, which was based on the Saturday Night Live character by Mike Myers. Back in the day, some students brought in the promotional board from the theatre and I put it up for a while and it just continued from there.

How long have you been at Marianopolis and what is your role here?

Twenty-seven years. I consider my role as someone who will be principle helper to students in whatever capacity is necessary.

What’s your favourite part about working at Wayne’s world?

The interaction with students. Because of where I work, it’s out-of-classroom needs, both fun and serious. It is very enriching and enjoyable.

How many students do you hire to work every semester?

What is the most popular item that students borrow?

What is the least common item that students borrow?

What is the weirdest thing a student has ever asked to borrow?

Where is Wayne’s World?

It’s in A-101, in the middle of the ground floor A-wing hallway, facing the Cafeteria.

What are the opening hours?

What would people be surprised to know about you?

My age. I’m 55 going on 55 and students are surprised! For many years I coached elite provincial teams and have been to numerous Canadian championships in ringuette while working at Marianopolis.

Is there anything else that students should know?

Wayne’s is meant to be, and always has been, a very friendly place. Never be afraid to come in and see what’s happening, ask what you need to ask and see if we have something that you may need. Whether it be a question, guidance, to be pointed in the right direction or simply to borrow something (have a lot of items available to be borrowed!). If you need do any emergency shopping for school supplies or clothing, then this is definitely the place to be.