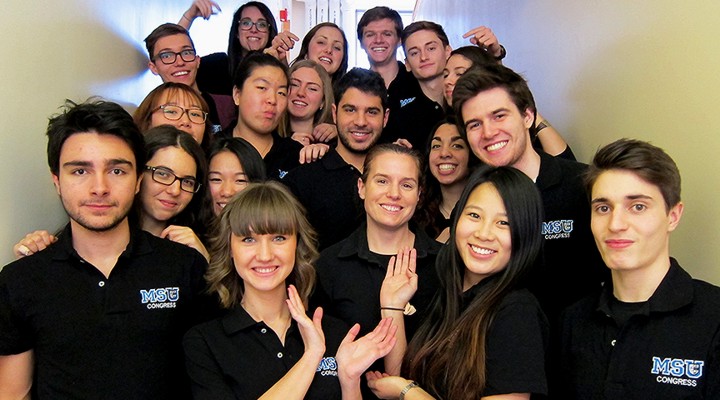 If you come to Marianopolis, you are sure to get support from Trudy Ste. Croix. That’s because as Student Life Animator helping the College’s many (and we mean many!) clubs, Trudy supports students in a variety of ways. She helps them organize events, start and run clubs, put on shows and charity drives – and those are just a few aspects of Student Life at Marianopolis.

Trudy says, “I remember very clearly when the admission representatives from the various CEGEPs came to my high school. I was immediately drawn to Marianopolis. It sounded like a place I would fit in. When I visited the campus, I immediately fell in love. The atmosphere was welcoming and you could tell there was something special about this place. I applied and was accepted. I was also fortunate enough to receive a very nice Tuition Credits from the College for my two years. I had a great time while studying at Marianopolis. I was fortunate enough to take part in a three-week exchange program to Hamburg, Germany.”

Trudy, who graduated in 1992, was the typical Marianopolis student: she dove into (and thoroughly enjoyed) life outside the classroom: “I was a member of the Dance Club and performed in the Theatre Club’s production of Grease, The Musical. I remember all the great events that Student Services and Congress organized, from comedy in the Caf. to dance-a-thons and fundraising dinners and the annual Talent Show. I remember thinking to myself at the time what fun it must be to work so closely with students and helping them achieve their goals.

“Marianopolis is also where I got one of my first part-time jobs. I worked at Wayne’s Counter, in Student Services, the best on-campus student job ever! Not only was I learning a lot in the classroom, but was amazed at how much I was learning outside the classroom.”

After receiving a Bachelor’s in Specialization Translation with a minor in German Studies from Concordia University, she realized that her dream job of being a United Nations translator felt too isolating. Eventually she returned to her old school and became Student Life Animator.

“It is so rewarding,” says Trudy of a dynamic job that puts her in touch daily with about 170 students who help run the various clubs. “Being part of a club is a great way to meet people. It allows you to get together with people with similar interests and maybe even try something you never thought you would do.

“We are known for our academic excellence here at the College but our Student Life is what really sets us apart.”